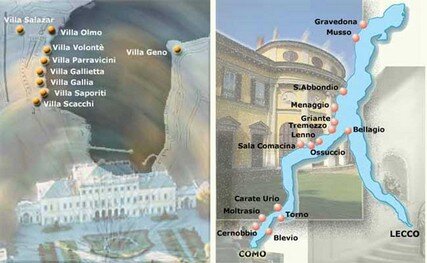 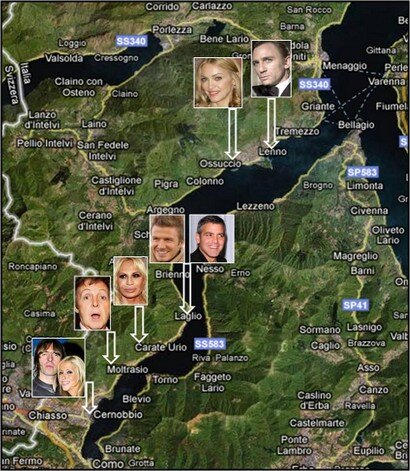 The Stars of Lake Como, Italy
If you fancy holidaying with the rich and famous this year but can’t quite afford Hollywood then why not stay closer to home and choose the shores of Lake Como. It’s long been a favorite among A-listers, going all the way back to 1816 when the estranged wife of the Prince of Wales, Caroline of Brunswick made the huge mansion, Villa d’Este her home. The villa has since been transformed into an exclusive hotel to the stars.
Many celebrities have fallen in love with Lake Como and some have invested in a more permanent base including George Clooney, Sting, and Richard Branson who all have Lakeside villas. Even the Beckham’s have been house hunting for a holiday home since David transferred to AC Milan and it’s been rumoured he could be back in May as George Clooney has offered his home to David as a getaway from busy Milan and before he has to go back to LA.
Many people will recognize the beautiful scenery of Lake Como as it’s been the backdrop for many Hollywood blockbuster films including James Bond: Casino Royale and Ocean’s Twelve which were both shot on Como near Bellagio. The film buff’s among you may also know the hotel-casino featured in Ocean’s Eleven was the Bellagio in Las Vegas, which was actually inspired by a visit from hotel mogul Steve Wynn to the real Bellagio on Lake Como (he of course stayed at Villa d’Este when he stayed there) If you hop across the Lake from Bellagio you will also find the villa where Anakin Skywalker and Queen Armidala became acquaintances in Star Wars: Attack of the Clones.
There are many places to stay around Lake Como and regular boat trips available which all sail past celebrity homes and the well known film sets – you just need to know where to look! (see attached map & points below).

Celebrity Map Points Reference
a) This is Villa Balbianello which was one of the key filming spots for James Bond film Casino Royale.
b) The Locanda restaurant is a must for any star spotter. Benvenuto Puricelli, the current owner boasts that the restaurant has been a hotspot for celebrities including Brad Pitt & Matt Damon (during the filming of Oceans12 when the whole cast stayed at George Clooney’s house), Sylvester Stallone, Elton John and even Madonna ate at the restaurant when she stayed at Gianni Versace’s house.
c) Villa Oleandra, which belongs to George Clooney. He bought this in 2001, and later acquired Villa Margherita, which adjoins it.
d) Villa Le Fontanelle is the beautiful house owned by the Versace family. Many high profile guests have stayed at the house including Elton John, Madonna and the late Princess Diana. Gianni Versace split his time between his Lake Como house and LA. When he died he left it to Donatella’s daughter Allegra.
e) The Villa d’Este is the place the real A-listers stay if they don’t own their own property on the Lake. It was built in 1568 and between 1816–17 was home to Caroline of Brunswick, the estranged wife of the Prince of Wales, later in the century it was turned into a luxury hotel and today it has been created to be ‘A Home from Home’ for the elite. Brangelina, Paul McCartney, Sharon Stone, Yves St. Laurent and various political leaders from all over the world have all stayed there.
f) The restaurant Il Gatto Nero is situated here. It’s a favourite for George Clooney as its just 15minutes away from his villa and is renowned for its fresh fish and stunning views. It’s also where Liam Gallagher & Nicola Appleton celebrated Liam’s 36th birthday last September.